This blog post was inspired by a few questions I was asked by the strength staff at the LA Dodgers and it's something we hear often. In short, what do you do with this thing? The answer is you can do quite a lot, but stepping back and looking at it from a high level, it’s an interesting question. I think the real value of RepOne is in the individualization of training variables. Mostly load, volume, rest times, and to a lesser extent training frequency and prescriptive accessory lifts. With full auto-regulation of load and volume alone research shows significant improvements in athletic performance (APRE). This is traditionally applied with velocity cutoffs, velocity loss, velocity thresholds, 1RM estimation, etc. 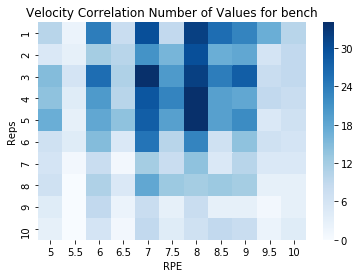 A velocity RPE chart is one of the best context tools in VBT.

Like any other genuinely useful data acquisition tool, a Position Transducer provides context within which coaches can make decisions. Strength coaching without data is like navigating your living room in the dark. Sure, you know the fundamentals like where your couch is, how far until you get to the fridge, the approximate location of the sharp corner of the coffee table, but why risk your shins and toes when simply flipping on the lights can help you get to that mint chocolate chip in record time? This is why the sports analytics market is growing at roughly 40% per year. Coaches and trainers know that they’re surrounded by the information they need to make that great decision, they just need to figuratively turn on the lights.

So what can you do with a simple product like RepOne on day one?

Without the depth of context we use when, for example, choosing attempts for Squats & Science athletes in competition, you can still use data to impact training decisions. In fact, methods developed by strength authorities like Dr. Bryan Mann and Louie Simmons (RIP) detail easy to implement strategies that can be applied to an entire team out of the box. Simple ideas like generalized velocity bands and dynamic effort thresholds can make VBT easy enough for the most inexperienced freshmen athletes.

So what are your options if you want to implement some of the more individualized autoregulation and Motion-Based Training features, like those enabled by RepOne? That’s a question we’ve spent a lot of time thinking about, both at the team and athlete level. Velocity targets auto-regulate on an individual level by default, but the targets themselves can be specific on an individual level.

“[Peak Velocity, Mean Propulsive Velocity, and Mean Velocity] are reliable and can be utilized to develop LVPs (Load Velocity Profiles) using linear regression. Conceptually, LVPs can be used to monitor changes in movement velocity and employed as a method for adjusting sessional training loads according to daily readiness.”

We’ve seen coaches implement complex paper card systems, and depending on the amount of resources available, coaches can use the data on these cards to build the context needed to make true autoregulatory decisions. If you don’t have a large staff or a small group of athletes, you’ll need software that can manage these large volumes of data.

Another common question we get is about F-V curves. There’s an interesting distinction to be made between mechanical force and force output via muscle contraction.

“Other studies have indicated that methods that depend only on kinematic and kinetic results have limitations when used to determine power output (Cormie et al., 2007b; Hori et al. 2007). It seems that the linear position transducer technique overestimates power due to increased force output production derived from double differentiation of bar displacement. When this technique is applied also to the mass of the subject, standard biomechanical procedures are rejected in that force is determined without considering the acceleration produced through a movement (Dugan et al., 2004). Despite this limitation, our results indicate that monitoring bar velocity is a useful procedure to control load intensity in resistance exercises, as observed by other authors (Hori et al., 2007; McBride et al., 2011)” 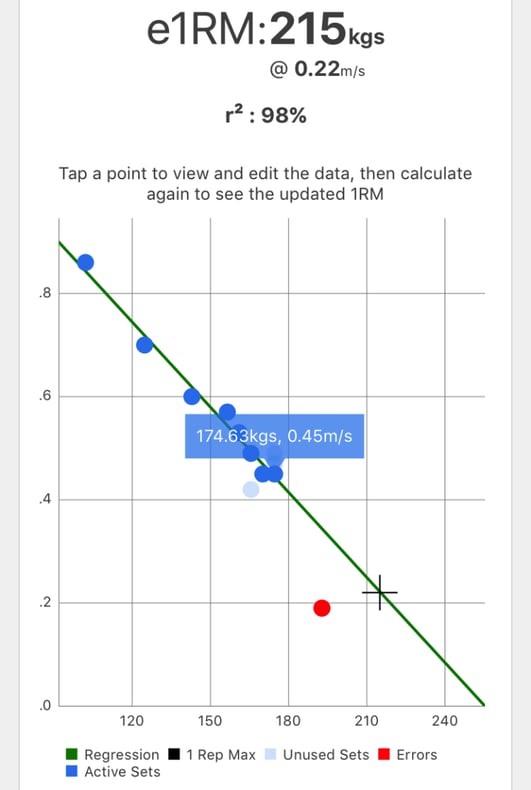 Load-velocity curves are another great context tool in VBT.

This is one of the reasons we haven’t developed a power or force metric in the RepOne app. You can easily implement both power and force metrics in Kinduct with our data, but it’s a bit misleading. If you want to develop a true f-v curve you want to use RepOne in conjunction with a force plate. You can fake a f-v curve with one or the other, but they both have limitations. That being said, a load-velocity curve, which is what RepOne can measure alone, is very useful and should be measured either on a continuous basis or should be evaluated as frequently as each mesocycle.

The Emergence of Motion-Based Training

By utilizing post-activation potentiation (PAP), coaches can train athletes to produce high levels of power to enhance their potential performance.